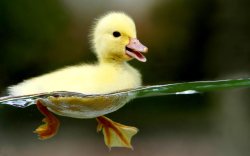 The minute he heard the splash into the crystal clear waters of the lake, Fuzzy started to run. His little duckling legs had never moved so fast in his short life. He didn’t have a lot of time.

The Master might get out of the lake any minute now. But according to his daily routine, which Fuzzy had closely monitored for over a week, he spent at least 25 minutes in the water, swimming and enjoying the tranquility that only those calm blue waters could offer.

Fuzzy’s mother told him not to go near humans. They could not be trusted. One minute they would extend a caring hand and the next they would pull down a heavy object over your head. There was a thin line between love and hatred, she always said. But Fuzzy somehow wanted to give humans the benefit of the doubt. After all, this certain one seemed alright. He was a sort of ‘live and let live’ mentality.

But today Fuzzy felt daring. After all, it is good to take a risk once in a while. It keeps the adrenaline pumping, he thought. So he ran.

Within two blinks of an eye he was there. Now he simply had to locate his exact target. From what he had observed, the Master placed it under the clothes he left on the river bed. So Fuzzy dug under the shirt. And there it was. Black and shiny. He had seen him operate it so many times, he felt almost like an expert himself. It only took the push of two buttons. And…. Mission accomplished!

He had just taken a cute duck selfie! And he was so proud. He was certain the Master would enjoy it too!