Since the bloody attack on Wednesday 07 January 2015 on the French satirical newspaper Charlie Hebdo, which resulted in the murder of 12 people, including the chief-editor and four cartoonists, a lot has emerged. The shock and horror of this action intensified in the next two days, with more murders, as the terrorists were finally killed on Friday 09 January 2015, after a police siege ended two hostage situations in Paris. The Internet is being overflooded with articles, opinions, memes, and messages of support, declaring #JeSuisCharlie, or #JeNeSuisPasCharlie, or even #JeSuisAhmed in honour of the Muslim police officer who was so ruthlessly shot by the attackers. But who really is this Charlie, and what does it all mean? Charlie Hebdo is a French satirical weekly newspaper, featuring cartoons, reports, polemics, and jokes. It describes itself as left-wing and anti-racist and is Irreverent and stridently non-conformist in tone. It first appeared as “Hara-Kiri” in 1960 and later changed its name in order to overcome the ban that was imposed in November 1970 after its cover spoofed popular press coverage of the death of former French President Charles de Gaulle, eight days after a night-club disaster that resulted in 146 dead. The new name was derived from a monthly comics magazine called Charlie Mensuel. Charlie allegedly took its name from Charlie Brown, the lead character of Peanuts – one of the comics originally published in Charlie Mensuel – and was also an inside joke about Charles de Gaulle.

Over the years, the publication has been criticized and even banned due to its controversial cartoons, particularly attacking religion. It was some of these cartoons, ridiculing the Prophet Mohammed that reportedly led to the 7 January attacks during the morning editorial meeting of the paper. It is argued that the paper is being racist, not respecting other religions and insulting the faith of a minority, which has never really ever felt welcome in France anyway. Hence the growing of the #JeNeSuisPasCharlie group. Editors are faced with a tough dilemma as to whether they should reproduce these controversial cartoons, with many uttering “what right do I have to risk the lives of my staff to make a point?” 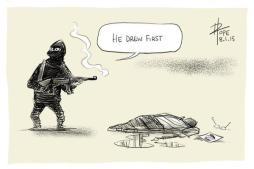 Yet, on the other hand, around the world, the debate of freedom of expression and the right to be able to say, write or paint anything is being bellowed across social media, in mainstream news, and in candle-lit staged protests in central squares and outside French embassies. #JeSuisCharlie is a message of solidarity. It is a message that the pen is more powerful than the sword. That if you are so easily affected and offended by words and cartoons, then you should think deeper about what it is that you truly believe in. In fact, cartoonists all over the world have joined their voices and pens in protesting against the attempt to silence them and declaring support to Charlie Hebdo.

The Charlie Hebdo attacks demonstrated to the world that no matter how technologically and socially advanced we proclaim we are, we are still very backward in our mentality. Yes, we do have to consider carefully what we say and do in order not to offend anyone, but when does that become censorship? If people are supposed to be able to freely express themselves, shouldn’t we be equally tolerable of everyone’s opinion? Was it not Voltaire who said that “I disapprove of what you say, but I will defend to the death your right to say it”?

This is also what led to the emergence of #JeSuisAhmed. Ahmed was the 42-year old French police officer who was shot and killed on 7 January. He was a Muslim who died, fighting to defend a publication known for insulting his culture and religion. Without discrimination. Without hesitation. Because he knew, like so many Muslims who condemned the attack, that violence is not an answer to anything. In fact, by “sharpening the contradictions” that have so loudly appeared after this tragic attack, we are all feeding into the hatred, the polarization, and the atrocity. This publication, is not the only one that used cartoons to satirize political, social and religious life. In fact, people who understand the importance of humor in our lives, take it lightly and enjoy such criticisms. From Plato, Voltaire, Jonathan Swift, George Orwell to Stephen Colbert, Jon Stuart and even Matt Stone and Trey Parker (South Park), satire has always been crucial to a healthy life. Because it would, supposedly, lead to a better comprehension of our life and help improve it. Reacting with extremism is the worst that could happen, because “extremism thrives on other people’s extremism and is inexorably defeated by tolerance”. Take a pen out and write something. Witness how easy and permanent it is to scribble a word, and how difficult it is to erase it. Consider what would you like to be, the pen or the eraser?

©BernardoErlich “The world has become so serious that humour is now a risky profession.”

The story and debate that has erupted is not about satire. It is far beyond it. The violent attacks will lead to repercussions on all sides. And it is already evident at how other media, mosques and international organisations are on high security alert. Fear is taking over once again. So, we need to ensure that this demonstration of solidarity that begins by lifting a pen and raising your voice will ensue. That it will trump over the hatred and will rally behind a common cause – that of accepting difference, respecting others and committing “to defeating those hell-bent on destroying the common fabric of our society”. It is now the time more than ever to prove that we, as multicultural societies, can live together in peace. Western heads-of-state have over time urged media not to publish certain stories or cartoons even – as in the case of investigative journalist Gary Webb and Charlie Hebdo’s editor-in-chief, Stephane “Charb” Charbonnier. Both refused, no matter how precipitous developments may follow or as how offensive they might be perceived. Charb remained defiant even after al-Qaeda reportedly placed his name on an “enemies of Islam’s Prophet Muhammad” hit list. Two years ago, explaining why he continued to publish cartoons criticizing Islam, despite threats to his publication, Charb said, “I prefer to die standing than to live on my knees.” 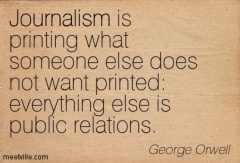 Freedom of expression is a fundamental liberty and a right that we all so profoundly demand. But this attack was not just on journalists, it was on society as a whole, on people who dare to be different. It was a wake-up call that nothing can, or should be, taken for granted. And it was an alert that we do not live in as much a liberal world as we want it to be.

Also part of Daily Prompt: (Your thing) for Dummies

One thought on “Who is #Charlie?”