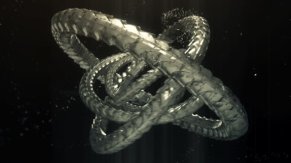 She suffered from being too organized. If that ever was a sickness, she was the number one patient. Victoria was obsessed with having everything in order. She felt it was the only way she could control whatever life threw at her. That is why she succumbed to a panic attack when she realized that afternoon that she had lost it.

The ring Danny gave her.

She never took it off her finger, unless she was washing clothes by hand. Then she would place it on the little shelf under the mirror on top of the marble wash-basin and she would stare at it, daydreaming, as she scrubbed the delicate clothes clean. Once she had hung the clothes to dry, she would return, soften her hands by rubbing on cream, and replace the silver ring to its rightful place on her finger.

But today, something went wrong. She realized the ring was missing from her finger when she reached for a piece of cake during afternoon coffee with her friend Emily who had come over to share some gossip. What ensued could only be described as havoc, as an anxious Victoria stormed the bathroom and then paced nervously around every room of the house, re-tracing every step she had made – and which she remembered – in order to find the lost jewel. Emily could do little to console her friend.

It’s hard being a perfectionist. You can never take anything lightly. And never let anything go. Not even when Danny said the ring could be replaced. But for Victoria it would never be the same.

It was a beautiful afternoon in the park and Vincent had taken Buster out for a walk. The golden retriever basked in the sun for a few minutes, then sprung to its feet and called for a game of Frisbee. Vincent loved this game as his dog always made the most unaccepted leaps, catching the Frisbee in his mouth, no matter how far it went. So he always tried to throw it as far as possible; for him this was also a very good way to make new acquaintances. And Buster was on his own so adorable.

The Frisbee was heading for the lake when Buster made a leap worthy of professional jumpers, and caught it with his teeth glistening in the sunlight as he fell in the waters with a grand splash, cooling everyone who happened to be around the scene. Vincent ran to apologise to the surprised onlookers, when he saw something small glistening at the edge of the pond.

It was a silver ring.

He picked it up and read the inside engraving “I will love you forever, Danny”.

Someone must be very concerned this is lost, he thought. But on the other hand, what if it was intentionally thrown away? What if this was a love story gone all bad? Sometimes love doesn’t always head in the direction the heart wants, he pondered, as Buster joyfully bounced to his side requesting another round of Frisbee.

She had done this for ages. It was a profession carried on for generations, for as long as she could remember. Her mother had taught her how, and she was in turn trained by her mother and so forth. They roamed the country practicing it and she had learned to read people better than she read the cards before her.

People came to her seeking a glimpse into their future. They wanted to feel the illusion of being able to control what would arrive. The majority never really believed the fortune-teller and they all thought that she was just taking their money in exchange for a few positive words that had no reasonable basis. Yet they still went. People are like that. Silly and gullible.

Yet they are also longing and hopeful. And this is what the fortune-teller relied on.

She only remembered the cases that most strongly made an impression on her. And there was this one couple she could never forget. Not even five years later. She had felt their aura since before they had entered her tent at the local fair. The young woman had convinced the man to go see her. She had said it would be fun. They were newly-weds and you could tell by the sparkle in their eyes, by how they gazed into each other so lovingly, by how in love they appeared.

The first thing the fortune-teller noticed when they sat before her was the silver ring on the girl’s finger. There was something about it. It had brought them so much love and happiness, but for some reason it would also bring them so much pain and suffering.

She pretended to look into the crystal ball and began to tell them that they would have a long and happy life together. The couple smiled and squeezed each other’s hand. But the fortune-teller was not telling the truth. It was one of those rare instances that she looked into the ball in her hands and felt a déjà vu. She felt her vision become misty and could almost see what the couple’s future would be – it was cloudy and grey, shadows had creeped over their rays of sunshine, and it was all caused by a small circle, a loop, a ring.

“Hold on to each other, but not too tight, or else you will lose one another forever,” she said as the couple walked out of the tent. The girl looked at the fortune-teller as she turned to leave. She said nothing, although her smile had faded.

The fortune-teller looked back into her crystal ball and saw a reflection of her own dark complexion staring back. Fate was never something anyone could ever foresee. Or control.