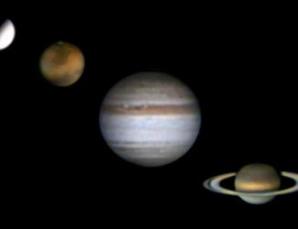 Jupiter was born and raised on Saturn but fell in love on Mars. She knew well what it meant to be split between two worlds. Literally.

When she was born, her parents, native Saturnians, decided to give her the name of another planet, simply because it seemed so majestic from their view of the solar system. She grew up on Saturn, a planet where everything had the shade of blue. From sky blue, to aquamarine, to turquoise, to dark blue, to blue black even. She liked her planet a lot. But Jupiter was restless. She wanted to go out there and explore. She was certain there was something more out there. Something other than just this blue.

She soon found herself on Mars, a planet filled with shades of red – ruby red, dark red, pink red, rose, coral red. She decided to stay a while and discover a different way of life. Variety always intrigues. Together with that, however, she found a breath of fresh air and a soulmate that made her heart beat a little bit faster.

But he was on Mars. And her family was on Saturn.

The distance was minimised by rapid-speed vehicles that helped make the light-year journey seem like crossing over to another neighbourhood. But it still entailed travelling between planets. And no matter how often or how long she stayed on one, it never seemed enough. So Jupiter decided to do something. She took out her heart and split it in half. She gave one part to her family to remember that even if she wasn’t constantly physically present she was always with them. The other she replaced in her chest and flew to Mars. Her soulmate would complete the other half, and she would always be whole when she returned home.