Archive for the tag “Cathedral”

Enchantment by the river

There are few cities in the world that enrapture you from the moment you enter their borders. Cities that overwhelm you with their distinct architecture, their harmonious environment and their cultural warmth. Strasbourg is one such city.

The capital of the Alsace region is situated on the borders between France and Germany and has over the years been the subject of dispute between these two great powers.

Its historic city centre – the Grande Île– is surrounded by the river Ill flowing beneath the stunning 18th century bridges that are found throughout. It was classified a World Heritage site by UNESCO in 1988, the first time such an honour was placed on an entire city centre.With its picturesque buildings, the city combines Germanic discipline and French finesse. It is a city that keeps you mesmerised with its stunning architecture, its scenic landscapes, and its breathtaking skylines.

The Cathedral dominating over the city with its 142 metre spire was described by Victor Hugo as a “giant and delicate marvel”. Its appearance of carved-like stone make it a magnificent sight right in the heart of the centre in one of the busiest squares all year round.
Inside it is just as elegant with its colourful stained glass windows, and its Madonna vitro with a crown of stars on a blue background which inspired the European Union flag.

And there is the skillfully carved Pillar of Angels standing right next to the Astronomical Clock – a wonder of craftsmanship that every day at 12.30 features the twelve Apostles passing in front of Christ to receive His blessing, while a cock crows thrice.

After taking a spiralling 332 steps up the tower that literally take your breath away, you discover a view of the city that makes it all worth it.

Situated just opposite the Cathedral is the imposing Palais Rohan, formally an episcopal residence, which now hosts three museums: the State Apartments and Decorative Arts, the Fine Arts, and the Archaelogical Museum. 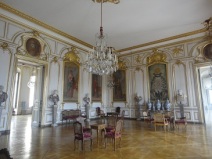 With Louis XV being the royal apartments’ first guest in the 18th century, the palace was built along the lines of Versailles.

But that is not the only thing that is reminiscent of the rest of France in Strasbourg. Petite France is the former tanners’ quarter which originally hosted a hospital treating patients with the “French disease” (syphilis) which was spread at the end of the 15th

century. Now it is a prominent tourist destination for a drink and a traditional dish under the shade of the large trees, admiring the timber-framed charming houses interwoven with four canals. 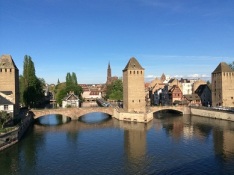 But the most majestic view of all is at the Ponts Couverts – the four Medieval Towers that served as fortification. The towers originally guarded the entrance to the city and were linked up by wooden bridges, protected by a roof until the 18th century.

Exactly opposite the bridge stands the Barrage Vauban, a barrage and lock designed in the 18th century to inundate the waterways of Strasbourg and defend the city in the event of a siege. In 1966 a panoramic terrace was built on top granting access to one of the most beautiful views of the city.

A walk along the river bank is essential as it reinvigorates the sense of nature that is usually lacking in big cities. Swans and ducks glide gracefully in the tranquil water, disturbed only by the occasional boat tour around the city.

The regal neo-Renaissance buildings around Place de la Republique – the Palais du Rhin, the National and University Library – appear all the more beautiful viewed among the colourful spring flowers, while the hundreds of youth in the city rush to the parks to absorb the cloudless sunlight.

European capital as many EU institutions are situated here – most notably the European Parliament, the Court of Human Rights, the Ombudsman and the Council of Europe.

With only 273,000 inhabitants Strasbourg draws people of all ages from all around the world. A vibrant city and a lively atmosphere, it embraces you to its core and invites you to explore every corner of its fascinating culture. There is always something more to see from a European capital. And when it is as elegant, heart-warming and enchanting as Strasbourg, there is no doubt it will have you back sooner than you know it!