Archive for the tag “curiosity”

Fear of the unknown

“Come on, let’s go!” His voice was anxious, masking the excitement and enthusiasm of a well-kept secret only he knew.

She was reserved, almost scared. Where were they going? Why? What would be there? How would they go? How long would it take? Her mind was a whirlwind of questions. She probably appeared dazed too, perhaps betraying her confusion to the outsider. So much, that it prompted him to reassure her. “It’ll be fine. Don’t be so afraid. It’s going to be fun!”

He took her hand and led her to the car. He smiled at her, his eyes glowing. She smiled back nervously. “Sometimes you don’t need to have all the answers,” he said.

When the car stopped, he turned towards her. She was gazing outside trying to figure out where they were. “Close your eyes”, he said. She was almost shocked. “Come on, close your eyes. You’ll ruin the surprise otherwise. Don’t you trust me?” It was a cheap card to play – the trust issue – but he knew she would cave to it. “No peeking either!”

She gripped his arm as he led her out of the car and up a grassy hill. The fresh air penetrated her nostrils and filled her lungs with oxygen. It helped her get her mind off the fact that her heart was pumping mad with anguish about this unknown event.

“We’re here,” he said. She timidly opened her eyes.

In the middle of a picture-perfect scene – green valley, tall trees in bloom, colourful flowers, peace and quiet – there lay a picnic feast waiting for them.

She laughed wholeheartedly and jumped in his arms.

“Sometimes not knowing too much is the best way to keep calm,” he winked.

Robert took out his notebook and began to scribble frantically. It would have seemed absolutely normal for the journalist he was, had he not been in the middle of a queue in a supermarket. Across him a middle-aged man who had just finished paying for his groceries was looking for his wife who had re-entered the aisles in search of an item they had obviously forgotten. But that was not what was worth noting. The man stood boldly at the till and yelled out her name. His wife was called Nora. Once he had no response, he asked the security guard roaming the general area, where his wife was. The guard looked up in awe, as if someone had awoken him from a deep sleep by pinching his arm. “Who is your wife?” he asked. The episode continued for a few more minutes, until the wife finally appeared without holding anything and asked her husband in the most natural of tones, “did you find it?” He hadn’t moved all this time.

Robert was smiling as he was noting it all down. It was the perfect story for his next novel.

He usually found these sporadic gems in the most common places. In markets, in buses, in coffee shops, even just during a stroll around his block.

It is amazing how much you can find by simply observing and listening to people.

Robert had an innate curiosity. It was characteristic of his profession, but it was something that to him came natural. He always wanted to learn more and constantly urged himself to discover something further than what was handed to him. That, he believed, was the only way he would mature as a person and expand his knowledge.

It’s good to wonder about the world. It opens your eyes and ears and takes you to places you would never have otherwise encountered.

The chicken, the monkey and the duck 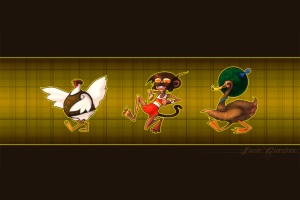 Once upon a time there was a chicken. It was fluffy and yellow when it was born and everyone admired at how cute and cuddly it looked. It was the joy of the barn. Yet, the chick knew that once it grew up it would be treated just like every other chicken in the coop, and would eventually be sacrificed to feed others larger than itself.

The chick wanted to change that. It could see no reason why it could not be the pioneer in a different life for chickens. And it was determined to prove to all the other animals that laughed at it that it was possible. All it took was resolution and courage. So the chick packed a few seeds in a little bundle and set off. It was going to change its destiny.

The chick was of course unsure of what it would encounter outside the farm, but it was stubborn enough to keep going. No matter what life threw in its path, it would deal with it.

The chick entered a forest path and was enthralled by all the big trees around it with noises from all sorts of animals. Birds were singing in the trees, creepy-crawlies were sliding across the grass, woodpeckers were pecking on the tree barks, deer were grazing peacefully in the shades of the leaves. The chick stopped in its tracks, amazed at the wonders of nature. Never had it imagined how beautiful life outside the barn could be. All of a sudden, an acorn fell on its head. But this chicken didn’t fear the sky was falling and start to run like crazy. No. This chick simply looked up and saw a playful little cheeky monkey grinning at it.

The two reached a large blue lake. It seemed so calm as if it was a transparent crystal sheet covering the land. And on it there were ducks and swans skimming across the water. There was in particular a young duckling. It was not ugly at all. And it was a duckling that would grow into a duck not a swan. Curious to see what these two were staring at, the duckling swam close to the shore, and with a hop jumped on to land. The chick and monkey were startled with this fluffy animal that was splattering water all over them.

Soon enough, the two became three, as the duckling too wanted to experience life beyond the lake.

And so the animals continued, discovering new places and new friends, growing up together and enjoying life in the fullest. Because there will always be someone who wants to live beyond the confines of their own world, and no matter how wonderful you see their world, someone else will always want to see more.

So moral of the story is: don’t be afraid to exit your comfort zone, you’d be surprised at how much more there is out there that you never even imagined!

The thrill of a good scare

Ever wonder why some things are like a car accident – you know it’s awful but you just can’t look away? From horrific car/plane/train crashes to collapsing buildings, devastating explosions, bombing attacks to disastrous hurricanes, people are captivated by such images of disasters. So much that when it appears before you, you just cannot look away. Researchers believe that this is based on the innate curiosity of human beings. But also the fact that we are drawn to doom and horror – you know it is horrible and don’t want to look, but somehow you can’t turn away. Whether we admit it or not, humans are inexplicably fascinated by tragedy, by the morbid, the unreal so-to-speak. It is the reason why even children enjoy Halloween so much, dressing up in gory costumes as blood-sucking vampires and murdered victims with an axe on their head and blood dripping down their forehead. Graphic and ghastly as these images may be, people love a good scare. It is why thrillers and horror movies become instant box office successes. And why the most popular theme park attractions are the haunted houses and the ghost rides.

So why do people actually enjoy being scared? Investigators say it’s because of the adrenaline rush that results in a euphoric sense of relief at the end of the terror. The hormonal reaction in response to a threat or crisis is that very action that motivates us to “like to be scared”. It is the “flight or fight” syndrome of primitive times that still applies to the animal kingdom. At the moment we feel threatened, we have increased strength, power, heightened senses and intuition. (Just like Spiderman – but not all the time). But if the brain knows there is no risk of really being harmed, it experiences this adrenaline rush as enjoyable. For that, some people crave to be frightened. To feel the chill down your spine, the nail-biting horror, the cold sweat. Simply for the rush and the relief at the end. For the fun of it all.

Similarly, people may strive to see a car wreck simply for the need to feel the risk of an actual car crash, of living the excitement as if it was actually you there, but without the actual danger. It’s as if you are living that very rush – dangerous rush – through someone else. It is the insatiable need to expose yourself to sensations that are different from the routine. Diverse from the security of everyday life.

Scary has various connotations, however. Talent shows presenting dancers who are as graceless as a wooden stick, and singers as toneless as a shrieking cat, can all be deemed scary in a sense. But still you somehow cannot look away. Perhaps it is the pleasure of making fun at others who are daring to do something unabashed, even though they are terrible at it. Or perhaps it is the very insatiable thirst to satisfy our curiosity. A curiosity, that as Steven Wright said, “killed the cat, but for a while I was a suspect”.