Archive for the tag “mirror” 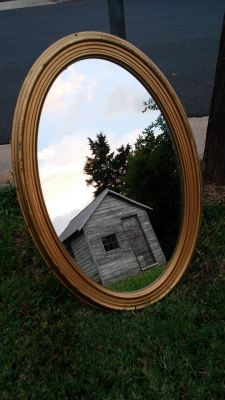 It was the only thing left over from the yard sale. And she didn’t understand why. If she could afford it, it would have been the first thing she would spend her money on. It was plain and “normal”, but sometimes what looks simple is more than that. Plus, it definitely had a story. It must have. Nothing so “ordinary” was every what it appeared to be.

As the sun set, she found herself mesmerised by it. The clear reflection of the garden shed had captured her attention.

Or perhaps it was the flickering light that appeared at its window.

The other side of the looking glass

The feeling of the key turning in the palm of your hand as it unlocked the door was one that always brought relief to Priscilla. For no matter the horrors, the exploitation and the emotional drainage she experience outside in the real world, in there, through that door she was safe. “My castle, my home” she would say and she meant it. It was as though in there nothing could touch her.

Until that day. When she walked in to find a couple she had never seen before, sitting in her living room, eating a slice of cake.

She was dumbstruck. She dropped the key and stood still as if she had been petrified.

“Hello dear, there you are! Would you like a piece of cake? It’s fresh and not too heavy!” The woman spoke to her as though they had been apart only for a little while since she last saw her. And her voice was so soothing. But who was she?

“Come, have a seat. You must be tired!” The man’s voice was just as welcoming. It was almost wrong not to go and sit with them. They were both so inviting.

But who on earth were they?

Priscilla rubbed her eyes. Maybe it was a dream, or rather a nightmare. She pinched herself, but nothing worked, except perhaps give her a bruise.

“Who are you!?” she managed to utter at last.

Priscilla was beginning to feel scared. Had she gone insane?

“We arrived this morning, dear. You left us to go to work because something urgent had come up. Your auntie made this cake in the meantime and we were waiting for you. Don’t you remember?”

“Ok this is all too weird,” thought Priscilla.

The strangest part of it all was that she had absolutely no recollection of what had happened that morning. She only remembered her terrible day at work. But no matter how hard she tried she couldn’t remember what took place before that, or how she even got to work!

Everything in her house seemed normal. All in its usual place. And these people seemed so nice and kind. If only she could remember who they were.

Cold sweat trickled down her spine. For a moment she felt her blood turn to ice. What if she wasn’t even the person she thought she was?

She rushed to the mirror.

Phew! This was one face she still recognized.

But on the other side of the looking glass, Evilia her evil twin, was determined to have the last laugh.