Archive for the tag “purr” 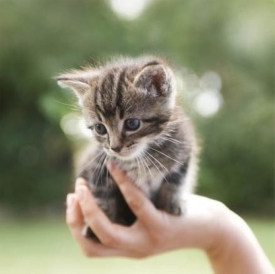 They found him on the street behind a bush. His faint yet persistent cry acted like a siren call. His eyes had the colour autumn leaves take just before falling off the tree and they radiated a sadness that should not have been there at his age. He was so small he could fit in the very palm of your hand.

It only took a bowl of milk to tame him enough to get close. He needed a petting and a warm hug. Who knows for how long he had been abandoned out there all alone. It wasn’t very cold, but for him it could have well been the middle of winter. Loneliness messes with your senses.

He perched almost immediately in her lap, as if he had found the home he had been dragged away from. Then he started to purr. That soft, constant, vibrating purr that causes a smile to appear on your face and goosebumps to take over your body unconsciously. Because it was a sensation like no other. Knowing that the simplest of things, the minimal of your actions, can cause someone so much happiness.

She soon felt dependent on it. It was the moment she longed for after every day. To sit on the sofa and allow him to settle in his usual – by now – position. And then begin that sweet chime that only a cat can utter.

It’s amazing how such a small thing can take up the most room in your heart.

Because she soon found that she cared more about that feline creature that had so surprisingly yet decisively entered her life, than for some human beings she had known for much longer.

But that was a bit of a problem though. Because for years he had been her companion, her friend, her confidante, her family, her soulmate.

And then one day he left.

As suddenly as he appeared. But far more painfully for her.

On that morning, when his purr ceased to sound, something inside her broke. It is painful losing something you love so much. Especially when he had your entire heart from the moment you saw him. The image of him lying there still could not be erased from her mind. But neither could all the moments spent with him. Those numerous occasions they had experienced together and which she would never change for anything in the world.

His little paws had forever been imprinted on her heart. And that is what she was going to hold on to. That her life had transformed in the most unexpected of ways with his arrival and she had become a better person because of it.